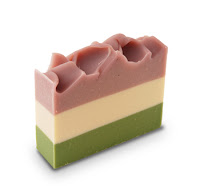 Honeysuckle Soap Bar from Fraiche
I received a box with two soaps and two bath bombs from Fraiche.  They have beautiful packaging down to the soaps that were housed in plastic flip top boxes.  The bombs were individually shrink wrapped and then boxed in beautiful chocolate brown flip top box with a peek-a-boo window.
I did take pictures, but somehow, the bath bomb ones came out all wrong.  Here are pictures I've taken off their site instead.  The soaps were:
Cinnamon Hazelnut (with coffee beans on top) which have some delicious sounding ingredients such as organic cocoa butter, ground coffee, coffee beans and cinnamon dust.  Smells like coffee and cinnamon and a little soap like, too.  Haven't tested this one.
The Honeysuckle soap has goat's milk and unrefined shea butter as two of the many wholesome ingredients listed on their site.  The scent is pleasant and the soap feels lovely in the shower.  The wavy top served as nice finger notches (like the ones they make for steering wheels).  That bar did not slip out of my hands at all.  Always a plus, because I can't seem to hold onto a bar for longer than a minute in water.  It is kind of a joke.  The lather was copious and the bar itself felt so smooth as I washed.  So smooth.
Now, their swizzles are pretty impressive.  They say swizzle, I say bath bomb.  All the same, but the fancy name made me want to try it right away.  They were instantly usurped by my kids, but I have plenty to say on the matter, because I watched it fizz and felt the babe's skin afterwards. 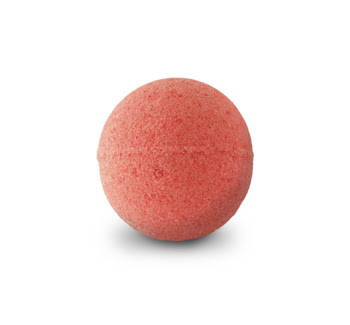 Hula-la Swizzle
The Hula-la Swizzle fizzed incredibly for a good three minutes!  My son was truly fascinated by the fizzing action and the smell was intoxicating.  It was sweet with papaya and other tropical smells.  When that thing finally stopped fizzing, the bath had a soft pink hue and my son's skin was baby soft for days.  There is unrefined shea butter in there, but I will warn those who bathe with butters of any kind, whether it be bath bombs with butters or bath melts, bon bons, etc.  Wash your hair in the shower afterwards because shea butter does not look good in your hair.  Greasy greasy.
The other swizzle was beautiful but the scent was overwhelming.  No review on that one.  I couldn't stay long enough to see it "go" in the bath.
The PR rep sent me the products, so I have had no contact with the founder, Johnan Ratcliff.  I don't know if Johnan makes the products, or if they are made by hand at all.  I know she started the company making them, but since it all looks so well done, I don't know.
Products were nice, presentation enviable, but a bit pricey for soap.  The swizzles are $17.50 for a box of three.  The soap is $12.50 per bar.  Typically soap bars of the same size (4 oz-5 oz) go for $3.oo-$6.00.
It all is quite beautiful, though, I must admit!
at Monday, November 19, 2007