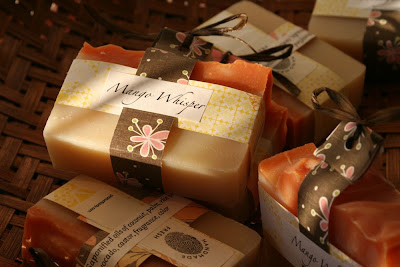 I've just sort of found my way. Perhaps it takes WAY too much time and I cut and paste, literally, but people are loving the Asian-inspired look. I buy patterned scrap booking paper from Michael's Arts + Crafts store and each type of soap gets different sets of paper. I'm having a lot of fun with this.
There are so many beautiful ways to wrap soaps: crepe paper, fabric, vellum, banana leaves, raffia string, plastic, gauze, paper, boxes, and some frightening things, too, I am sure.

What have YOU wrapped your soaps in if I haven't mentioned it in my list? I bet we'd all love to hear what you have to say. 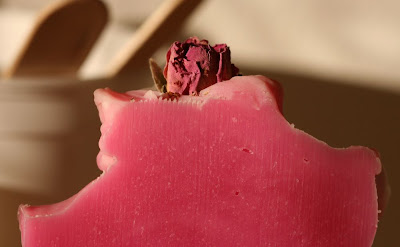 Mmm. Look at this soap. It reminds me of simpler days when chaos wasn't part of my life. :) 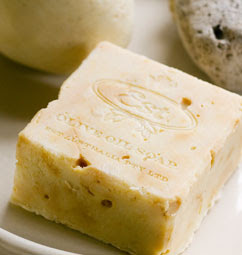 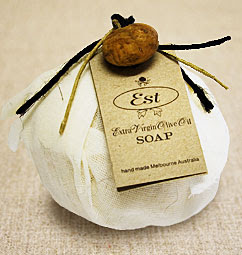 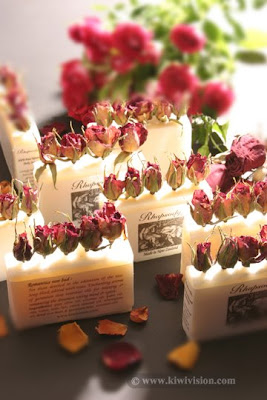 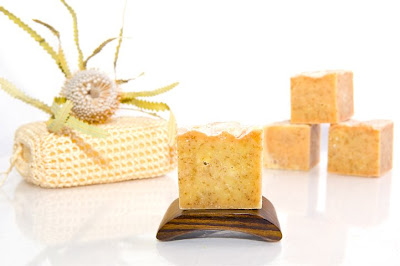 The Organic Scrub (Luscious. I love a scrubby soap - the scrubbier, the better!)

I think half the lure for me is the the lighting and photography. I truly believe that photography makes a HUGE impact on your products and if you are not using natural light, get lights that mimic natural light, or use extra time in the morning before work and set up your soaps at the window sill. Close ups of your soap, with detail is super important. If the buyer doesn't F-E-E-L the product or want to dive into it, will they really want it?

Perhaps it is that I am a visual person, but if I don't see close-ups with natural light, I move right along. A good example.......

This soap is nothing special, right? It looks like a typical glycerin soap... but I want it, I want to go to that room and take a hot shower and rub it all over my body. Why? Because I am IN that room with it. The picture has transformed my mood.

Is it just me or do you feel it too?

If You Are Looking For Infused Oils 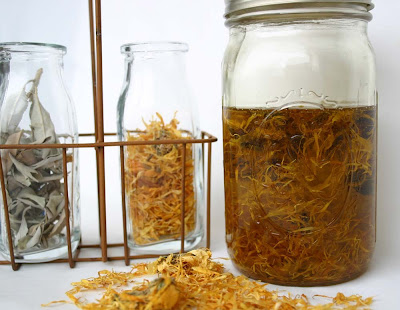 Go visit Heidi of Vintage Fresh. Fellow soaper and mother of four living in FREEZING Michigan has a new item in her shop that you might be very interested in! She is selling infused oils that she makes herself. Right now she's got a few ready for purchase for only $12.50 per pound. They are listed here:

In addition to her soaps and sundries, she has a 12 step blog: Soapaholics Anonymous. I joined last year. It IS an addiction, so don't anyone tell you otherwise, cuz they'd be lying!

Maria is a talented soap maker from Spain and I am in awe of her soaps. 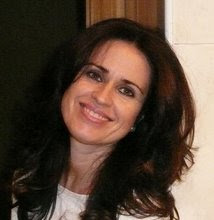 I'm not sure how I stumbled on it, but I found Maria's blog back in the Summer and have been in touch with her and complimenting her works of art since then. Every time I stop by her blog, she surprises me with yet another work of art. She embeds, funnels, swirls, uses great color combinations and pours with interesting shapes, such as the yin-ying soap below. Sometimes, it's just a presentational flair that she creates which seems so simple, but is completely unique (snowman photo). 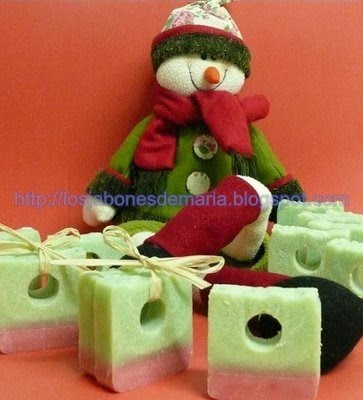 I understand very little on her blog, but when I comment, Maria always returns my comments in perfect English and is extraordinarily nice and helpful if I ask questions. She could be one of the nicest people out there. :O) I recently asked her if she would do a tutorial for The Soap Bar, so we'll see. Perhaps, this blog post will give her an incentive to share her creativity with the rest of the world. 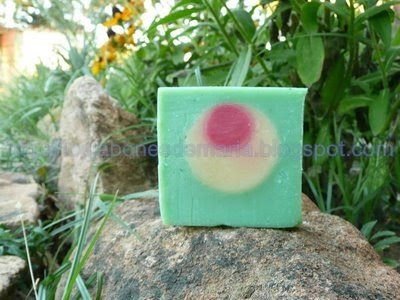 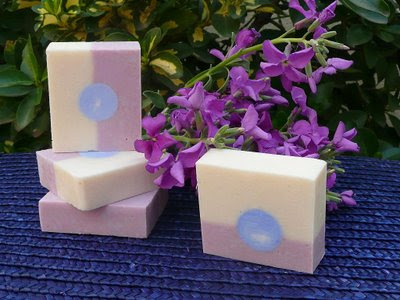 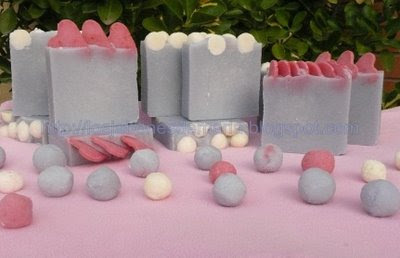 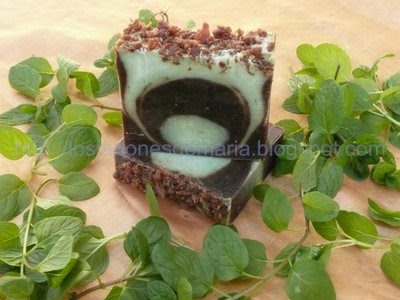 One small technical issue regarding Maria's blog: whenever I go to it, another website opens up behind it. I don't know why, and neither does she. Just letting you know so you don't think you are going crazy or that it's your computer.
at Tuesday, February 17, 2009 17 comments:

So after reading all of the comments you PRO SOAPERS gave me, I had a memory twang. I think I am s-l-o-w-l-y remembering what happened to my brittle batch.

Oh yes, for you all under 38 who don't have children or get migraines, you wouldn't understand how it feels to have your brain eaten.

So, this is my memory: I made two batches at the same time, so I was consistent in making exact measurements and doing it twice. This, right there is a bad idea for me because I can't multi task 20 things at once. Oh, I could make two batches at the same time, but I was also answering the phone, tending to my crock pot of Mama Bomb...and thinking about who-knows-what! So... the first batch I made was lavender. It came out beautifully with lavender essential oil (not my favorite) and did a swirl with rose clay and topped it with lavender petals and cranberry seeds. Nothing went wrong, at all with this batch. It's on my curing rack looking good and swirly, so there's that.

The second batch..... well, the oil looked great so I started to pour the lye water into it, started mixing with the stick blender, but realized that the hard oils had begun to solidify and were settling at the bottom of the bowl. What could I do at that point? I just mixed and mixed and mixed until it traced and then I pulled some out, as I had planned, added black oxide to make more swirls, poured it back to swirl with and BLAM, I got crap. So there you have it. Is it possible that it wasn't over using the lye, but mixing the lye water with the mucky muck I mixed it with? The reason I let it sit and cool off for so long was because I was working on designing and setting up my lavender batch.

I used a great fragrance oil that I've used before in my bath bombs. My shop customers LOVED the scent: black mission fig from Southern Soapers. I may have over scented the soap batch in addition to mixing lye water with muck, but now, the soap smells .... weird. I still love her scent and will continue using it in my b+b products. If anyone has made a successful batch with this fragrance, I'd love to know about it because I do not want the fragrance to be put in the same crowd as the other suspects in this investigation.

There you have it. My memory hiccup, and more information. 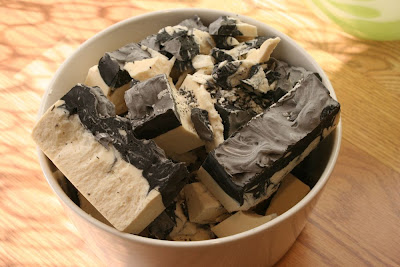 I read all the articles and they all tell me I put too much lye in the batch, which I didn't, but okay, whatever. I was going to rebatch the brittle nasties, but I think I'll toss them. They'll just turn gray and get ugly and I am tired of them already. I don't even like the way they smell.

So it's important to share the crap mistakes along with the pretty stuff. I learn from others when they make mistakes and hopefully you can learn from mine, even though I won't admit to this one. 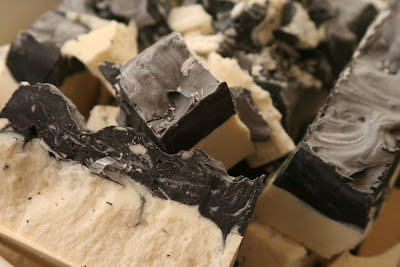 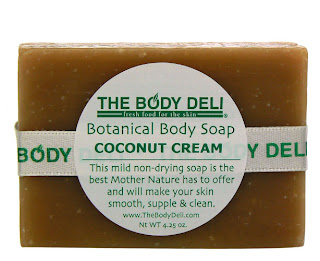 The Body Deli sent me a soap and a sugar scrub a while back and I was not thrilled with the scrub. It leaked in transit and was greasy, but their soap, in coconut cream, smelled really good. As most of you know, I've had a heck of a time finding a coconut fragrance I like, but they got pretty close. The soap was wrapped in plastic, which felt a little corporate to me. The packaging choices in general felt impersonal, but the soap was lovely. It was moisturizing, had nice bubble action and lasted quite a while.

They have SO much to choose from, it's dizzying, but their site is great. I love their ice box section - the products that require refrigeration. The photos of the products are wonderful! I mean, can you stand this?? I just want to shrink myself and take a dive... naked. 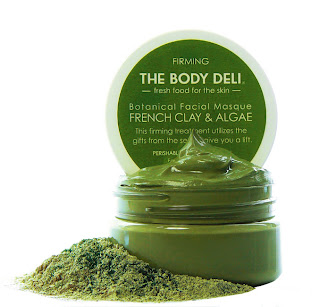 Dora's A Bad Influence According To Sources 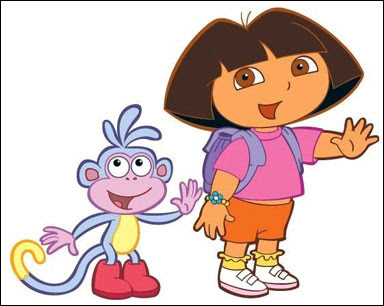 My daughter likes to eat cereal in the morning before school, while watching Spongebob Squarepants. When it's over, Dora The Explorer comes on and she shuts off the television. Well, this morning, she started talking about how Dora's a bad influence on little kids.

H u h ?
Nina starts off by saying, "What kind of message is she sending to little kids when she wanders off into the woods with a monkey and her backpack? She talks to weird men under bridges, talks to a piece of PAPER (map) and takes advice from her monkey friend. She's a terrible role model, Mom!"

Who thinks like that? Oh, r i g h t, hormonal 12 year olds who are in middle school and are figuring out where they fit into this world? Ah yes, perhaps.

I guess no matter what educational, non-violent children's show is on the air, someone's going to pick it apart - but who thought my 12 year old would do it?

Email ThisBlogThis!Share to TwitterShare to FacebookShare to Pinterest
Labels: not soap related, personal

Back To Mango Lassi For A Moment 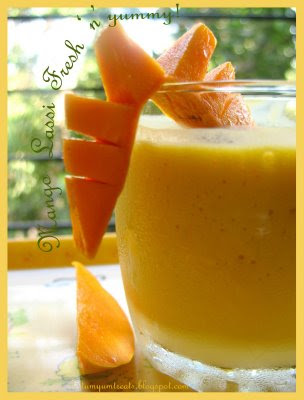 I have ordered the "bulk order" of Mango Lassi from Brambleberry and have contacted the people who showed interest in purchasing some with me. If I haven't emailed you and you DID ask to get in on the buy or you are interested in a pound of Lassi, please email me today or tomorrow at jo(at)productbody(dot)com and I will see if we have room. I think we will.

Wow, that picture is making me very thirsty and needing some really good Indian food. Can someone send over their chef to whip me up something? ;)
at Wednesday, February 04, 2009 8 comments:

The Saponifier magazine had a "Best Swirl" photo contest in January which I failed to post about (sorry). The polls are closed and I'm not sure when the winner will be announced, but I believe the winner will be on the cover of the next issue of the magazine!

There were so many amazing works of art that were entered. I urge you to go take a peek at the pure talent all in one place. They have 49 photos posted here for you to view. I only can recognize 6 of them and who made them and I am SUPER excited to find out who they all belong to!

Here are a couple I've never seen before, just to wet your whistle.... 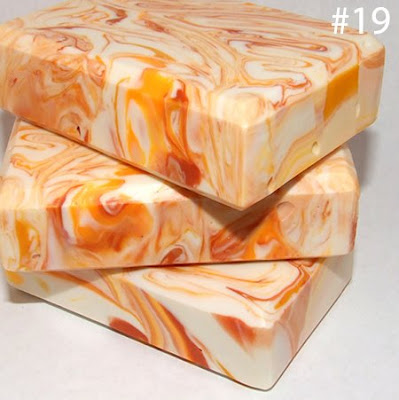 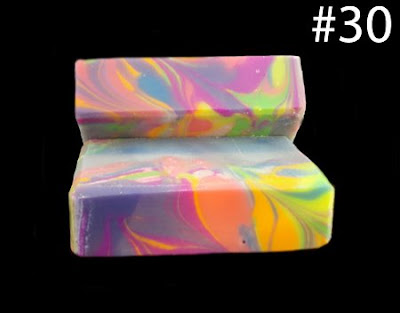 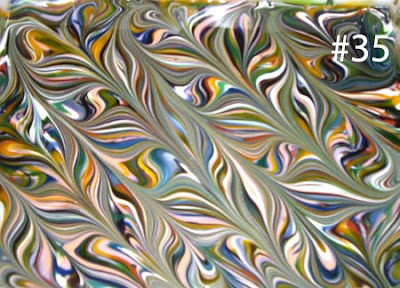