I have been a long admirer of Тонкая Материя's.  The soaps look incredible and I am awed by the lighting and photography skills this person has.  Maybe one day I could get my hands on the soap so I could review it!  Mmmm....

Here is lovely eye candy for  you. 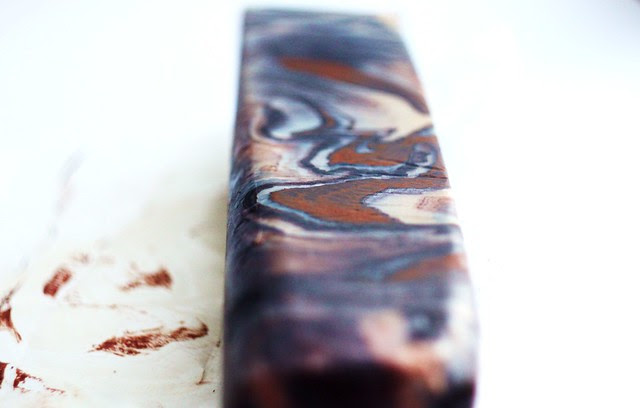 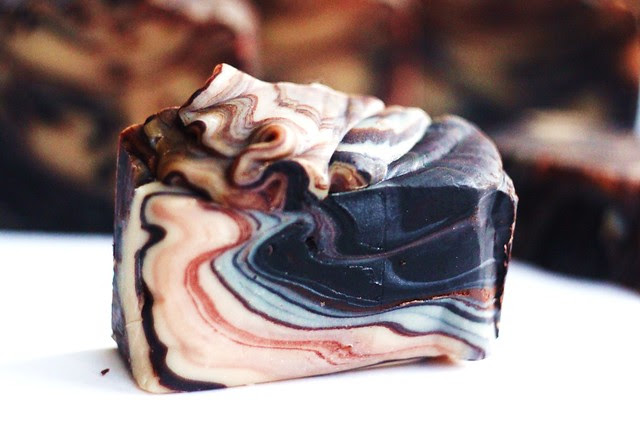 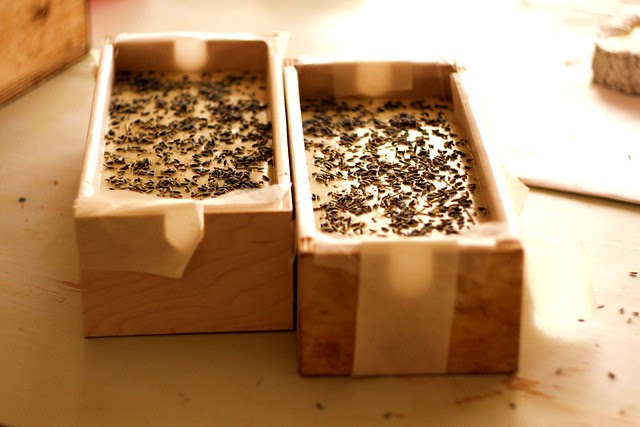 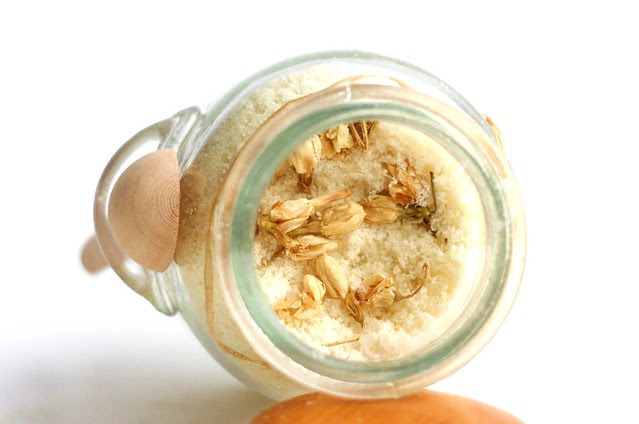 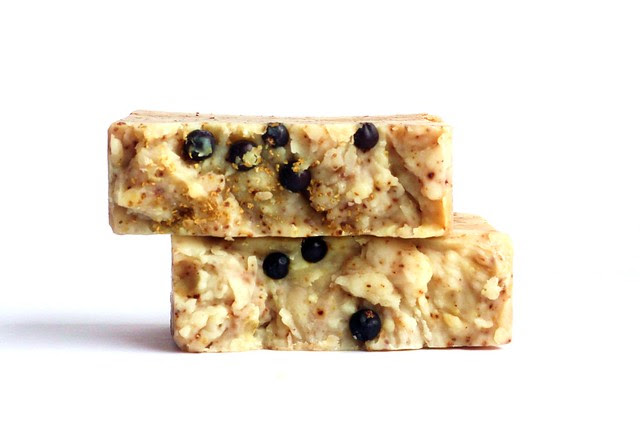 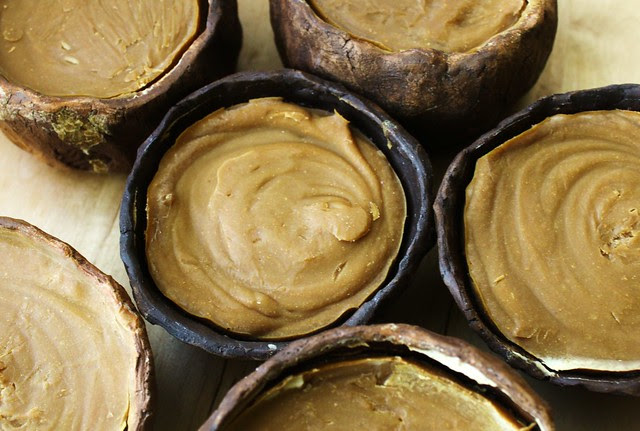 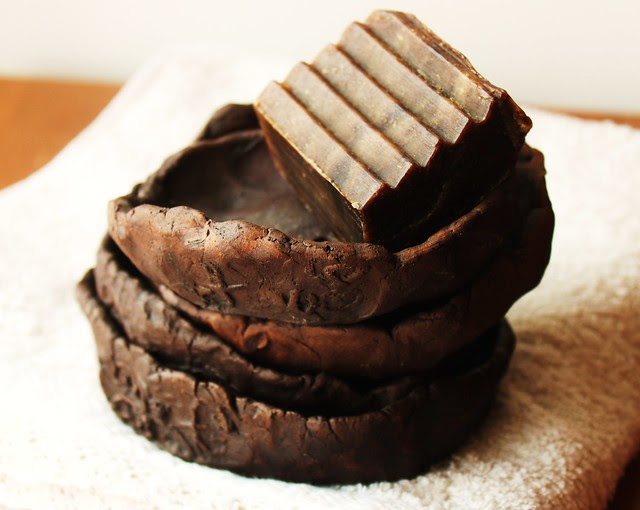 It's What You Scatter

I was at the corner grocery store buying some potatoes...
I noticed a small boy, ragged but clean, hungrily looking at a basket of freshly picked green peas.

I paid for my potatoes but was also drawn to the display of fresh green peas.  Pondering the peas, I couldn't help overhearing the conversation between Mr. Miller (the store owner) and the boy next to me.

'Hello Barry, how are you today?'

'Would you like to take some home?' asked Mr. Miller.

'Well, what have you to trade me for some of those peas?'

'All I got is my prize marble here.'

'I can see that.  Hmm mmm, only thing is this one is blue and I sort of go for red. Do you have a red one like this at home?', the store owner asked.

'Not exactly, but almost.'

'Tell you what. Take this sack of peas home with you and next trip this way let me look at that red marble', Mr. Miller told the boy.

'Sure will. Thanks Mr. Miller.'

Mrs. Miller, who had been standing nearby, came over to help me. With a smile she said, 'There are two other boys like him in our community, all three are very poor.   Jim just loves to bargain with them for peas, apples, tomatoes, or whatever.   When they come back with their red marbles, and they always do, he decides he doesn't like red after all and he sends them home with a bag of produce for a green marble or an orange one, when they come on their next trip to the store.'

I left the store smiling to myself, impressed with this man. A short time later I moved to Colorado, but I never forgot the story of this man, the boys, and their bartering for marbles.
Several years passed.  I had occasion to visit some friends back in that old town and while I was there learned that Mr. Miller had died. They were having his visitation that evening and upon arrival at the mortuary we fell into line to meet the relatives of the deceased and to offer whatever words of comfort we could.

Ahead of us in line were three young men. One was in an army uniform and the other two had nice haircuts, were wearing suits...all very professional looking.  They approached Mrs. Miller, standing composed and smiling by her husband's casket.

Each of the young men hugged her, kissed her on the cheek, spoke briefly with her and moved on to the casket. Her eyes followed them as, one by one, each young man stopped briefly and placed his own warm hand over the cold pale hand in the casket. Each left the mortuary one at a time.

Our turn came to meet Mrs. Miller. I told her who I was and reminded her of the story from those many years ago and what she had told me about her husband's bartering for marbles. With her eyes glistening, she took my hand and led me to the casket.   'Those three young men who just left were the boys I told you about.  They just told me how they appreciated the things Jim 'traded' them.  Now, at last, when Jim could not change his mind about color or size....they came to pay their debt.'

'We've never had a great deal of the wealth,' she confided, 'but right now, Jim would consider himself the richest man in Idaho.'

With loving gentleness she lifted the lifeless fingers of her deceased husband. Resting underneath were three exquisitely shined red marbles.

Email ThisBlogThis!Share to TwitterShare to FacebookShare to Pinterest
Labels: story

The Morbid The Merrier is Making The World Smell Better

I have been wooed by Lysa Luna's products for well over a year and I am an addict.  Officially.

She is the owner of The Morbid The Merrier and creates some powerful creativity in her packaging, scents, and products.  I had the fortune of receiving a package from her recently which included Odditoria Sugar Polish in "Morton" and I LOVES!  It is almost gone and now I need a bucket of it.  I don't know what sugar she uses but let me tell you that its grain is fine and smooth... I would rename it Sugar Smoothing Scrub, or Sugar Smooth or something.  Of course, if I were really given the assignment to rename it, I would put more thought into it, but you get what I'm saying.  It is soft, luscious and amazing.  No greasy aftermath and totally handmade from scratch. 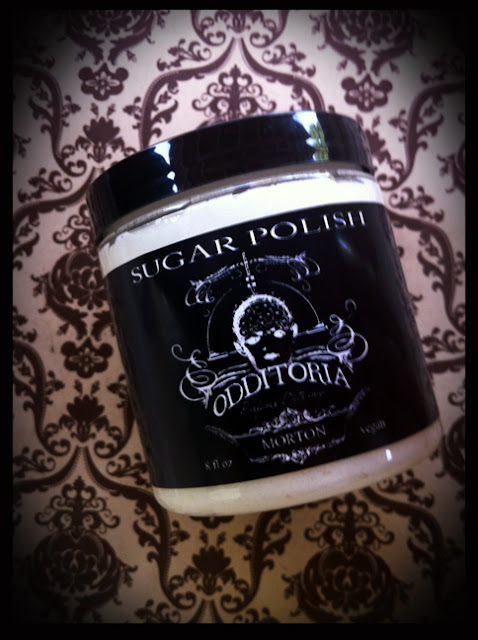 Could you just DIE with that label?  I love EVERY label she makes (and she designs them all!)

I also received an amazing selection of perfume samples:

Amiya, Histoire Du Secretaire, IsabellaDhanya, Horseman, Paramour, Histoire Des Amoreaux and Histoire Du Professeur.  All unique, all sensational.  My personal fave is the Natali which is a chocolate, patchouli phenomenom.  Lysa is responsible for me now loving patchouli blends.  (Brad is none so happy, but oh well)


Here a pic of Horseman: 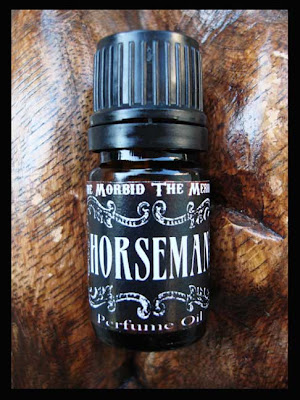 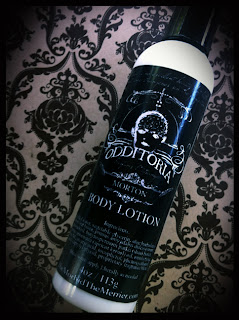 The thing on my next order will be Morton's Lotion.  Yummo!

So onto Lysa's incredible talent beyond bath and body.  She makes jewelry, sculptures, cupcakes and other things and oddities.  I love everything she sells.  Check out THIS necklace that she has for sale, too, on her site: 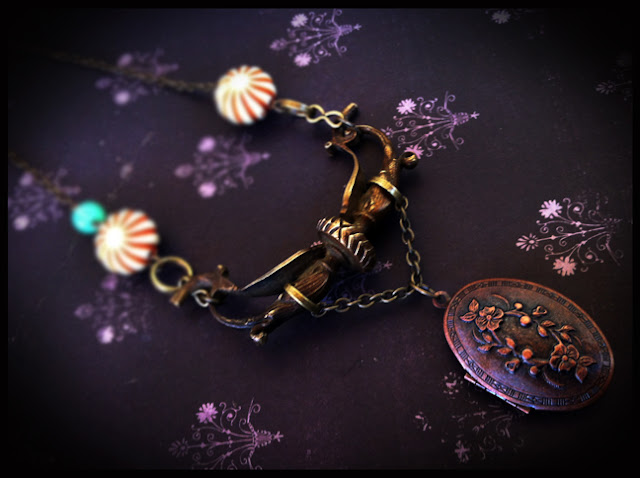 It has a locket that she fills will the buyer's choice of solid perfume.  And it's only $68.00.

In preparation to me writing this blog post, I asked her if she had a coupon code anyone could use if they wanted to buy anything and she is gracefully offering 10% off.

First you have to go through this link:
themorbidthemerrier.com?code=humbug  It automatically takes off 10% of everything in the order.  Get it while you can!

The Morbid The Merrier is quality, unique and consistent.  And she wraps everything so beautifully.  Every package.

These past two weeks have been incredibly busy here at the Product Body Headquarters.  Between life, filling and shipping orders and me getting a 2 day migraine that knocked me on my feet, I have finally gotten to Soap Travels.  I feel bad that I didn't get to it sooner, but it came at the busiest time of year for me.

Regarding Soap Travels, started by Cocobong:

Imagine receiving a little parcel containing three soaps from three different soapers. You get to choose one, replace it with one of your own creations and send it on its way again. This little parcel will travel around the globe, sharing your work with other great soapers.


Here are the contents of my package... they are all pretty and lovely: 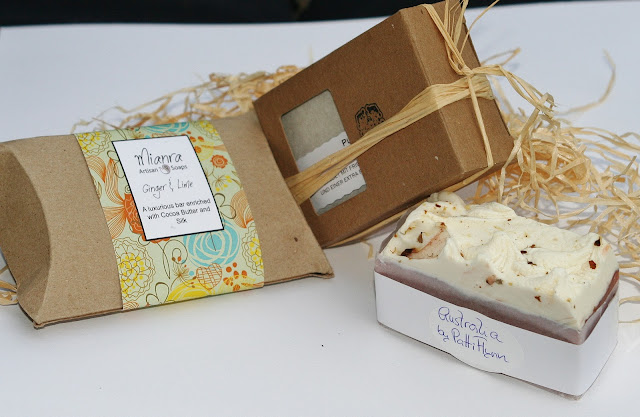 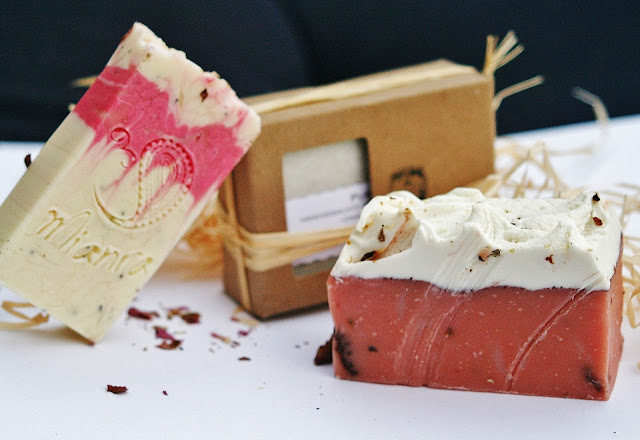 unwrapped except for Miss Julia's (cocobong) because it was too
beautifully wrapped and I knew which one I needed to keep.

Julia guessed that I would choose Patti Flynn's soap and, indeed, that is the one I am keeping.  I have never had the pleasure of trying Patti's soaps, so I must confess, I have been curious to say the least.  I have tried Julia's soaps, so that was right out.  The Mianra one is absolutely gorgeous, but I had to pass because of The Flynn.

I am now going to send this package across the world to the next in line for Soap Travels.  Hmmm, what bar to include.... I guess we'll all have to wait for that blog post.  I have a special soap I custom-made for a Palm Beach magazine that is quite pretty.... maybe I'll send that one along.  Made with Atlantic ocean water, coconut milk, banana and mango powder and blue and green mica.

Once I try The Flynn, I will post again with my mini "review" - you must know, I know!

I have to say how honored I am to be on this list of soapers who were chosen to be part of this awesome journey.

I know I said I'd do the Soap Travels update on Saturday, but life totally got in the way.  Now I am not with my soaps, so I can not be eloquent about their descriptions and there are no photos to share.  I promise I will get to it.  Today?  Tomorrow?  I will do my best to carve out insanity time for a little story of my soapy delivery.

With the holidays approaching, soap production has slowed A LOT.  Now I am just making more to replenish our depleting stock once the holidays are over.

I think this year I am actually taking a mental vacation from work.  We will actually close up shop for the duration of our children's holiday.  We are well prepared for the holiday shoppers and all packages will ship by the 19th and then we are closed until January.  Feels good to say it out loud and make it "official".  Oh....people can order, but nothing will be processed until January.

Now, I know I promised to take on more with this blog and bring it.  I MEANT it and it is my every intention to do so.  I just get so surprised every year how slammed business and life gets in the months of November and December, so I hope you are all patient with my bringings-ons...

I do have some great news.  I got a small package from Cocobong, who has started "SOAP TRAVELS", a project that will include many countries and their soap makers which is a super fun idea.  Here is how it works:

Julia sent me a parcel with three bars of soap in it.  I received it yesterday and I am super-happy-thrilled-amazed by this whole project.  It is such a great connection between us all.  Included in the package was a bar of her own soap, and two soaps from other soap makers, which I will reveal in my next post (I have no camera and I am typing in the pitch dark).  My job is to choose the soap I want to keep and replace it with one of my own.  I then send the package to the next Soap Travels participants and then, they get to choose what soap they want!  How fun is this going to be??  Cocobong has explained Soap Travels best.

So excited to bring the photos and descriptions to you over the weekend.

Come back to check it out.

I leave you with a photograph of Julia's soap.  This photo makes me want to be a wee little girl and dive into the peaks of that brown soap.  Just imagine being so small and feeling the smoothness of that bar.  Right now. 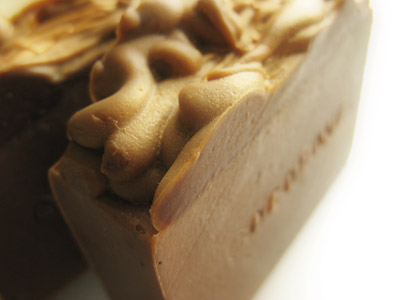 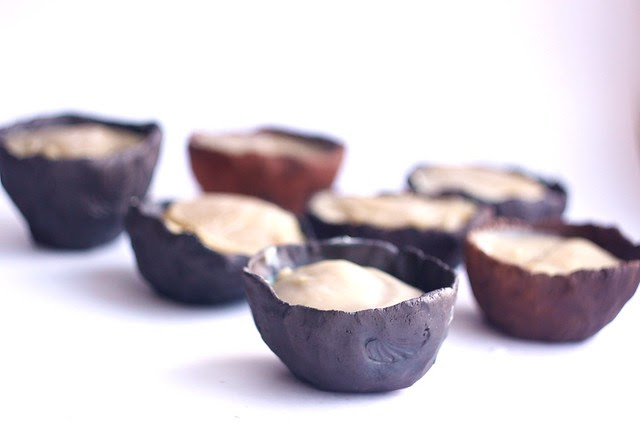 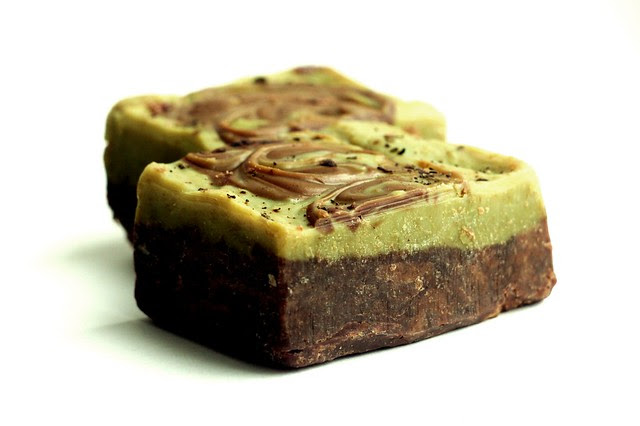 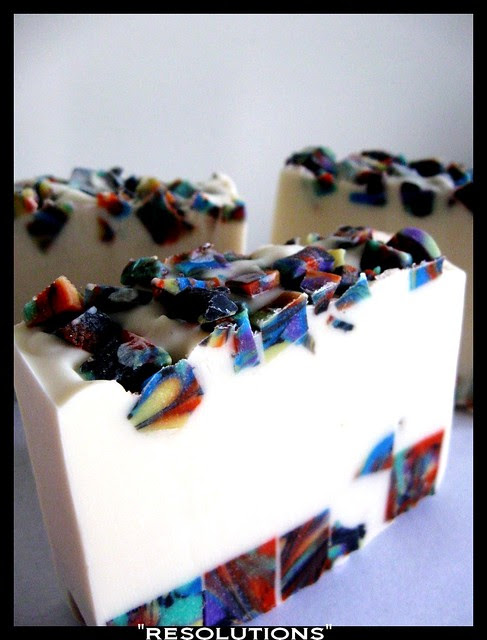 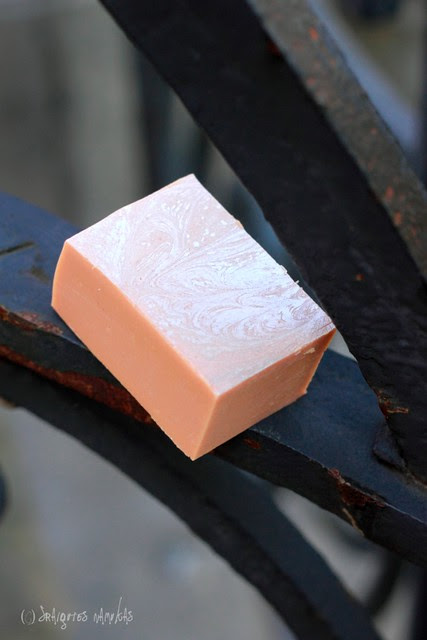 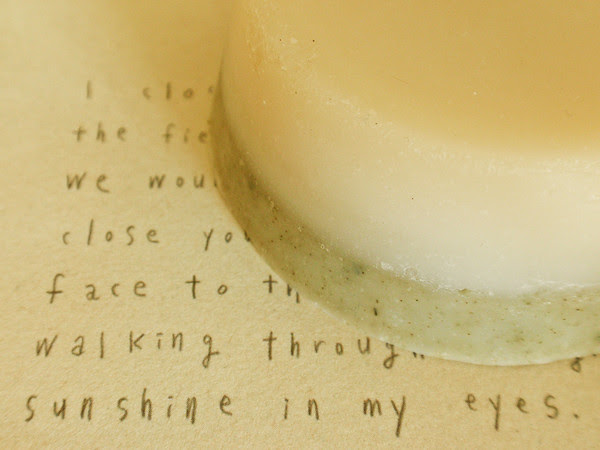