I have been wondering what went wrong with soap batch number 2. The alien skin, alligator skin, old lady in Florida skin one that I made last night.... 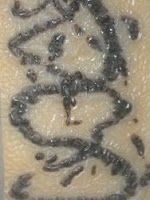 I think because of the yucky misfortune in #2, it might be helpful to me as well as others, perhaps to maintain a soap diary, so that you and I can learn together of what NOT to do.

I think I took the basic recipe and did some oil substitutions from Teach Soap - another one of Anne-Marie's successes :).

The following recipe I did in grams...and I can't tell you where I pulled it from, but I switched it all up anyway, and didn't do any lye calculations as some of you asked. I just assumed that if one uses a recipe, it tells you right there how much lye to use, so what's the problem? Well, apparently, I know nothing about this soap thing, and this is why I was hoping for a hands-on teacher. C'est la vie, I don't have one here with me, so let's move on! I will look into that lye calculating and get back to you on that.

Now, before I poured the batch in my Batmobile gift box that I used as a mold, I took about one cup of soap out and mixed that with two tablespoons of chicory coffee from New Orleans stirred it up and set it aside. I poured the big batch into the black Batmobile box, then drizzled the coffee soap over it into a squiggly design. I scented the soap with graham cracker fragrance and with the coffee added, it smelled really pretty unbelievable... but the squigglies kind of looks like puppy diarrhea in a DNA formation. Not really what I was going for.

Here is my Batmobile box...I know there are some non-believers but I kid you not (look closely):

So what went wrong?

Luckily for me, I have REAL soap surrounding me, like Morgan Street soaps which I just reviewed and Stella Marie's which will be next up in my reviews. Stella Marie also has a blog which currently has some really cute bath fizzie photos that look like Easter eggs in a basket. 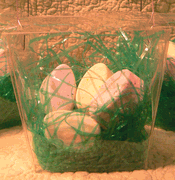 Here is a peek at some of her soaps: 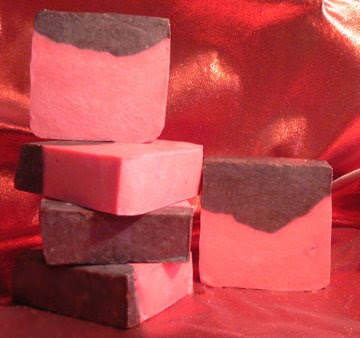 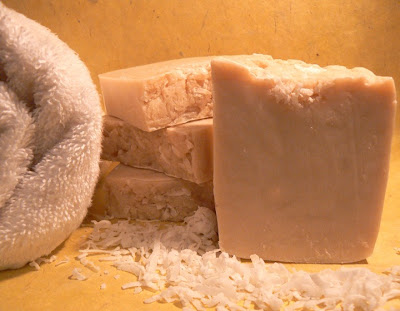 Joanna- I quickly ran it through a soap calculator with MMS. The numbers are very different, but
honestly this may even be off because of the 2nd coconut oil you used...but as you can see---the MMS (Majestic Mountain Supply)called for about the same amount of water, but more lye. Did you use distilled water? If not, this may be one problem in itself.

Welcome to the science of soapmaking!

Distilled water:
256 to 384 milliliters of liquid.

Since I've only made cp soap once (and under the watchful eye of an expert), I can't offer any solutions, but I am grateful that you're sharing your process (and getting input from all those other great ladies) so I can learn. Thanks!

According to the lye calculator, you didn't add enough lye? Maybe there's just not enough lye to turn all the oils into soap so maybe you've got tons more free oils floating around then you should? Just a guess! Hope it helps :)

Really, it doesn't look so bad! I'm cracking up over the Batmobile box. Looks like a moment from my life... all things kid-focused!

I'm a fan of the soap calculators, too! I always print it off and make
(scribble)notes all over them... the unpredictable soap moments are the fun part for me and keep me addicted! (Ok, I dated a couple of bad boys long ago!) Can't wait to see your next batch!

This just one obstacle you faced early in this craft. As others have said, your soap calculator is your guide for any soap calculation. Whether it is a recipe of your own or one from the web.

You know, I've always had bad luck with sunflower oil. It makes for soft soap, in my experience.

If nothing else, you might try a batch with another oil and see if you have better luck. I wanted to like it, but in the end I don't miss it :)