Soap Complaints In My House

Written August 2009 by Bradford Schmidt, my husband of 14 years. He writes two blogs, Bone In The Fan, The Meatist and writes for the newspaper, The Florida Weekly. Follow him on Twitter! @BradfordSchmidt He's funny...

In which I’m lazy and use an obvious title that rhymes with a common plural noun.

You’d think that being a partner in a company that makes fresh, handmade soaps and body and bath products would pay off in some way. That the years of work, the thousands of dollars invested, the cabinets filled with awesome soap that Joanna made would be worth a little something.

And yet, I still found myself in the shower tonight asking Joanna “Jo, do we have any soaps that don’t hurt?”

Really. There are a half dozen soaps in our shower, none of which are made by Joanna, all of which are some kind of exfoliating bar (if you define exfoliating as abrading various parts of your body). Look: I’m as happy as the next guy to have a little texture in my soap (the soap I use for soaping, that is), but what kind of crack-smoking psychotic makes soap with something approximating glass shards added as an exfoliant?

And don’t get me started on the little loofah soap dealie. You’ve seen ‘em: slices of soap with loofah inside them. Made by jamming a loofah into what’s effectively a fat tennis ball can, then melting and pouring translucent soap into it. Let it harden, pop it out, slice it up, and you have a delightful looking piece of soap that’s utterly useless unless you’re a masochist. 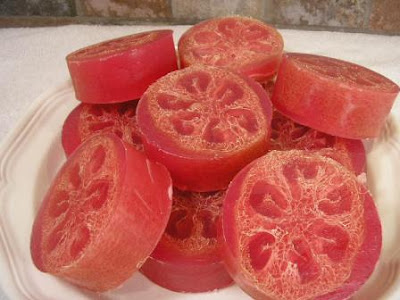 So Joanna finally handed me a piece of soap (though inexplicably still not one she made) without rocks, sand, glass or hardened loofah in it, and it stank like a South Florida grandmother with a bad perfume addiction.

I really need to talk to Joanna about this.

(this piece was originally written on his blog. I've linked the title back to his blog)

Nice soap. At first it looked like a slice of tomato to me.

That is hilarious! I had no idea Mr. Meatist himself was your husband. Isn't that funny that I've been a fan of both your blogs separately, yet never knew the correlation between. Good stuff!

Way too funny! If my husband had a blog (other than his "It's not a blog it's FFL Updating") he would write the same thing! I have 2 bars of soap, none made by me, both of which are Really, Really exfoliating (even I think they are a bit much).
He doesnt understand why my studio is filled with soap, yet none of it is ever in our bathroom.
Men, they just don't get it. hmph :)

Oh my, this was the laugh I needed today! I appreciate man who can throw around a term like exfoliating and then say something can be used at Gitmo. priceless and delightful.

For the love of God, Joanna, please give your husband one of your soaps!! He's begging you.

This is too funny! I am only relieved that it was not one of my soaps that he was referring to as the South Florida Grandma!! I agree, he needs one of your soaps, Joanna!

Had to laugh out loud when I read his post. I agree with Erica, please just give the man one of your incredible creations! :)

Brad is so funny, doesn't he realize that it will save on waxing and all those super secret trips to the salon for those who go for waxing. The soap has a purpose. Rub hard enough and it will just rip those hairs out. Might be a bit red raw here and there but smooth as a baby's ...

My bloke has a couple of buckets of his favourite soap no gritty bits either and if he comes across any others he likes that are limited editions he stashes them away and brings them out like in 18mths time.

Jo I somehow think it's time for you to make some "Extra Special Brad Soap" so he can build up a secret stash of his own.

Brad, tell us how you _really_ feel. ;) Missed reading your blog while I was away.

This was so funny. I had to laugh because it wasn't my husband who asked for plain soap, it was my 20 something daughter. I must admit I'm tactile, and I like "stuff" in all of my soap, so she very nicely, and I think fearfully, asked me to please make a plain bar of something!

That sounds JUST like my boyfriend. I'm learning to make soap and experimented with a few herbal exfoliants. He was not a fan. He describes it as a branch tearing across his skin. "I HAD ACTUAL SCRATCHES!"

sawnjuh - Did you have him read this story my man wrote?

I don't get it. Men like scratchy stuff. At least Brad does. Scratch me here, rub me there.... he's always rubbing up against the wall like a cat to scratch some itchy part, so when he gets into a shower, he needs a softie-poo soap?